I usually stick to picture book reviews on this blog. And recently I posted my favorite 30 picture books of 2018. But I also read a lot of great looooooonger books in 2018. Novels. Graphic novels. Works on non-fiction. Longer picture books that feel like novellas. So I thought I would give a special shout out to 20 I absolutely loved. So behold some short capsules (a few sentences each) about long books, capsules written with enthusiasm and a “you gotta read this” vibe, presented alphabetically by title. 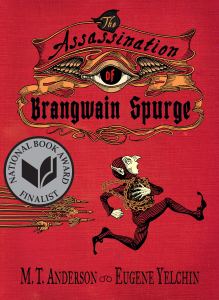 What is the truth? This fantastical, intriguingly idiosyncratic tale about a rather worldweary elfin historian catapulted into enemy territory (land of the goblins) to deliver a peace offering works as, among many other things, a fiercely funny fantasy tale and as a rather sobering anti-war allegory. Readers soon discover that M.T. Anderson’s brilliantly composed words (seen from one POV) are at odds with Eugene Yelchin’s strikingly grotesque illustrations (seen from another). What’s real? What’s propaganda? This epic cooks, soaring from one witty chapter to the next.

A bunch of boys play an increasingly dangerous game of collecting buttons from soldiers’ outfits in this taut World War I novel set in a small Russian-occupied Polish village. At the height of his storytelling powers, Avi doesn’t waste a single word here. Advertised as a middle school book (and kids who like historical fiction will find a lot to engage them), but adult fans of books like Lord of the Flies, Catch-22, or Slaughterhouse Five might also appreciate Avi’s “war is not only hell but insane” message. 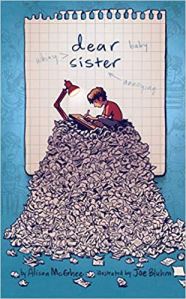 Siblings will relate to this heavily illustrated and moving story that spans seven years in the life of a boy (11 at the start) who finds his younger sister incredibly annoying. He writes letter after letter to her, complaining about her antics, but then grows fond of her as the years pass. McGhee’s emotionally direct prose crackles, and Bluhm’s charming illustrations tickle the funny bone. Their work seems effortless, and the book never feels saccharine.

This absorbing semiautobiographical middle novel stars a resourceful girl named Mia whose hard-working Chinese immigrant parents end up running a motel run by an unscrupulous owner who exploits them. This instantly likable protagonist hooks the reader with her dreams of being a writer, and also her commendable sense of fairness and social justice. Yang writes from the heart (without being overly syrupy) and tells a story about a kid being in a situation I have never encountered in any children’s book. Funny, fascinating, endearing. 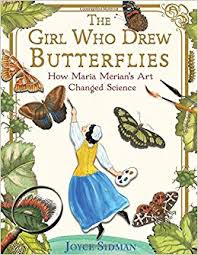 Wow, just look at this book’s striking design. Joyce Sidman’s rich, poetic prose sings with joy and wonder as she delivers this beautifully researched account of 17th century German scientist Maria Merian who studied insects and flowers. Packed with full-color illustrations (many from the time), this eye-catching wonder helps the reader (child and adult) understand what an impact this groundbreaking woman made. I learned a lot from this book. It’s clear, concise, and at times breathtaking. 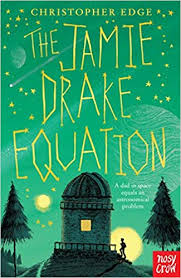 The best science fiction convinces you that a situation is truly happening, even when the situation is completely outlandish. Christopher Edge has the reader urgently flipping pages and gasping for air as an astronaut’s son fears for his father’s life after a mishap. Meanwhile, the boy starts receiving strange signals on his phone. Edge takes us on a cosmic time-warping dimension-hopping journey, and does so with remarkable wit and heart.

Yet another powerful book from Newbery/Coretta Scott King Author winner Christopher Paul Curtis, who gives the reader a down and out kid named Charlie squirming under the thumb of the year’s most horrifying villain. Set in the 19th century, Curtis’ historical novel breathlessly balances poignant drama with outright horror as Charlie heads to Canada with the brute to capture former slaves now living free. Readers might find the heavy dialect imposing at first, but once Curtis’ raw story grabs them they will be hooked.

2018 had many great books about family and connection, and Marcus Vega easily deserves to be considered one of the year’s best. This story about the rather imposing (due to height and size) Marcus starts off with a bang when Marcus gets into some trouble. Then when he travels to Puerto Rico (Cartaya in an author’s note says he wrote this before the devastating hurricane) to spend time with his family, the book becomes quiet and reflective with Marcus finding himself as person and discovering his place in the world. A gem of a coming of age story. 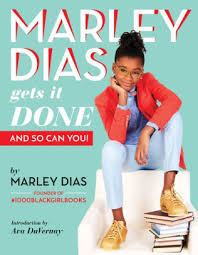 2018 had a lot of inspirational books informing kids how they can be activists, and Marley Dias, she of the supercool and successful #1000blackgirlbooks campaign, has written a truly informative one. This vibrant book works as a sound advice book about fighting for causes you believe in, covering a lot of topics in a concise, kid-friendly manner. She also has great advice for the publishing industry: books starring children of color should have their faces featured prominently on the books’ covers. She’s awesome; so is her book.

This riveting fictionalized picture book probably should have been on my picture book list, but for some reason it seems more at home on this list of longer works. It feels like a rich, rewarding novella. Alice Faye Duncan does a beautiful job placing a 9-year-old girl named Lorraine Jackson at the chaotic center of the 1968 sanitation worker’s strike and discussing Martin Luther King, Jr.’s role in fighting for the workers’ rights. Meanwhile, the great R. Gregory Christie creates distinct illustrations that skillfully evoke the turbulence of these significant events. A powerhouse. 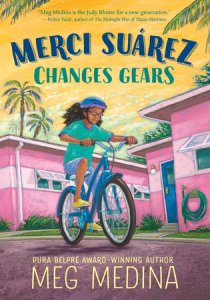 Some books grab you the moment you start reading them, and I certainly had that experience with this touching, funny, and heartfelt middle grade novel. Meg Medina expertly juggles many aspects of sixth grader Merci’s life: struggles with her beloved grandfather who is beginning to show signs of dementia, coping with a bully who makes life miserable for her, her dreams of getting a cool bike (hard when the family’s money situation is rough), and being forced to be a boy’s Sunshine Buddy. Instantly lovable, this book has a memorable heroine who bounces from one captivating circumstance to the next. 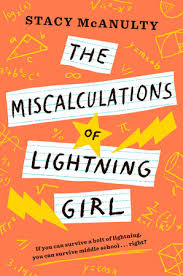 This might be favorite 2018 title to book talk to middle schoolers looking for a smart, snappy read. The premise immediately hooks them as I quickly describe it: girl gets hit by lightning, becomes a math genius as a result, and wants to keep her gift top secret from her classmates. Luckily for the reader, McAnulty backs this intriguing premise up with memorable characters, compelling twists, and relatable emotions. It’s a blast. 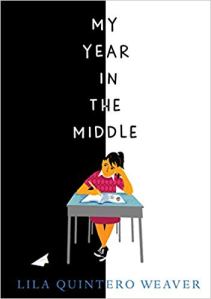 Based on Weaver’s own experiences, this evocative historical novel, set in 1970 Alabama, chronicles several fraught months in the life of a sixth grade Argentinian immigrant named Lu. She sits in the middle row of her newly integrated classroom between the black and white students. Lu emerges as an emphatic, humane first person narrator who loves to run and hopes to find her way during troubled times. 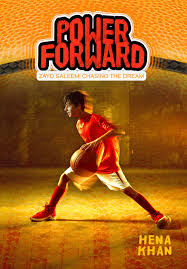 This early chapter book kicks off a fast-paced new series called On Point and stars a boy named Zayd who loves hitting the court more than playing violin (he wants to make his loving Pakastani-American parents happy though). This page turner mixes humor and heart with the basketball action, and creates a likable protagonist in Zayd. Readers care about his situation and will want to read future installments to see what happens next.

Exquisite illustrations accentuate the charm of this lovely graphic novel (set in 19th century Paris) about gender and identity. A young seamstress named Frances starts designing clothes for Prince Sebastian who asks her to create dresses so Sebastian can take the city by storm dressed as fashion sensation Lady Crystallia. Dazzling and cinematic, with images that flow with graceful finesse across the page. 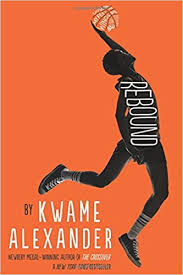 Kwame Alexander serves up a free verse prequel to his Newbery winning The Crossover. Crackling with energy as Alexander’s poems explode on the page, this heartfelt novel whisks the readers back to the ’80s to show Chuck Bell, the father of the twins in The Crossover, deal with change on and off the court. As much as I love The Crossover, I think I like this moving story even more. It’s a real 3 pointer.

Ah, the wondrous dangers of boyhood and outside play, depicted here with thoughtful grace by Kekla Magoon. This haunting slow burn of a novel introduces readers to two brothers who befriend the supercool Styx. This coming of age story casts a spell from its very first page and haunts the reader. I read this back in the late summer and still haven’t been able to shake it from my head.

Spooked! How a Radio Broadcast and The War of the Worlds Sparked the 1938 Invasion of America, written by Gail Jarrow, published by Calkins Creek, ISBN: 978-1629797762.

This exceptional work of non-fiction transports the reader back to 1938 when Orson Welles (currently in film news because of the recent Netflix release of his restored lost film The Other Side of the Wind) and his Mercury radio crew convinced listeners that evil outer space beings landed on Earth and started attacking everyone. This beautifully researched work walks the reader through all that transpired, and the effect feels immersive and visceral.

Oh, how I love this magical and extremely moving tale set in Victorian England. My favorite books offer a strong sense of place, and Auxier does not disappoint in this department. I feel as if I’m in those dangerous chimneys with 11-year-old Nan Sparrow, a chimney sweep of great talent. Sweep takes a fantastical turn when Nan meets and befriends a golem made of ash and coal. By the end of the book I became surprised by how verklempt Sweep had made me. This is fantasy writing at its very strongest, its most potent. It feels like a new modern classic.